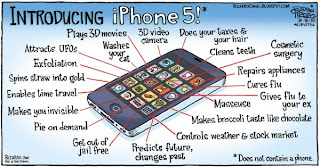 The free iPhone 5, along with the free iPad 2, maybe having a unique graphics core, the PowerVR SGX543, furnished by Imagination Technologies and launched last January 2009.

Apple Insider says that reliable sources inform that Apple should have something on chip (SoC, either A5 or A8) that may utilize SGX543 instead of the aging SGX535 that has been driving the iPhone since 3GS.

The SGX543 is the very first graphics processor IP core that is based on Imagination’s new PowerVR Series5XT architecture, one that can support multi-core and boasts some impressive performance figures, for instance, 35 million polygons in each second and 1Gpixels per second fill rate at 200MHz using one core.

By comparison, the SGX535 found from the Apple iPhone has been said to become clocked at 200MHz, a pixel fill rate of 500 million pixels per second plus the power to move 28 million polygons per second.

An eight-core SGX543MP8 clocked at 400MHz can achieve 532 million polygons per second and also a fill rate of more than 16Gpixels per second. Imagination Technologies says that as much as 16 SGX543 can be combined on a single SoC and interestingly refers to the SGX543MP being a GP-GPU solution.

Apple is stated to travel from one core to two cores, possibly with the SGX543MP2, an alternative that delivers almost twice the amount of 1 SGX543 transparently with very little strength overhead (within terms of dissipation and electrical power had).

The hands of time speed will probably be doubled likewise to 400MHz so that the iPhone 5 (and iPad 2) graphics could be as much as four times faster versus the current model; oddly enough, rumors have pointed to your quadrupling on the onscreen resolution for generation iPad tablet.